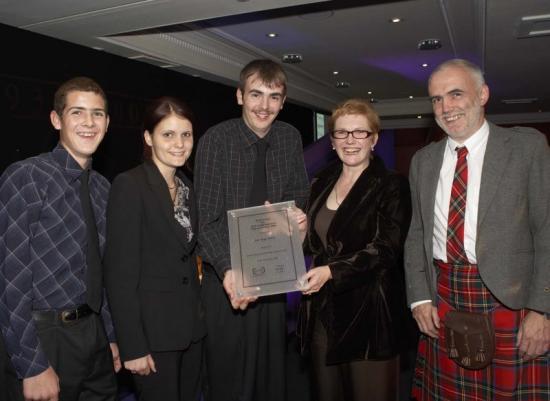 Pupils at Farr High School in Bettyhill near Thurso have been recognised at the Highland and Islands' leading business awards ceremony for their excellence in engineering.

This thriving Young Engineers Club involves around 30 per cent of third to sixth year pupils. Among their projects are innovative alarm devices for lambing and also one for vehicles. The award was collected by club members Anna Milligan, Adam Mathieson and Neil Mackay, along with club leader, John Milligan.

Headteacher, Mr. Jim A. Johnston, said: "Mr. Milligan has been running our Young Engineers Club for many years and, in that time, has followed up a lot of interesting ideas in science and engineering with a high proportion of our pupils. There are currently seven former pupils studying Engineering at University. The Lambing Alarm project is particularly appropriate for our school as it springs from one of the main local occupations - crofting and sheep-farming - while potentially having applications well beyond Bettyhill. This reflects a major aim of the school and the science department which is to prepare pupils for the wider world while maintaining their roots in their home area."

SCDI Chairman Shonaig Macpherson said: "Encouraging more young people to pursue rewarding careers in engineering, science and technology is one of the key targets of the education system at present. So it is great to see that, with participation rates of about a third of older pupils, Farr High School is showing how it can be done.

"Farr High School's location is no barrier to the club which this year entered two teams in the UK finals of the Royal Navy Challenge at HMS Sultan in Gosport, the Celebration of Engineering in Glasgow and the finals of the Highlands and Islands ICT Hothouse challenge." 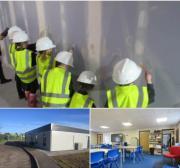 When a £1M school improvement project got underway at Farr Primary and High schools in Sutherland, nine pupils in primaries 1 to 3 got the chance to roll their sleeves up and have-a-go at painting their new general purpose room.   Councillor John Finlayson, Chair of The Highland Council's Care, Learning and Housing Committee said: "I am very pleased that contractor Morgan Sindall has recently completed capital programme works for Highland Council's school improvement programme at Farr in Sutherland.
[Educational Institutions]
28/3/2007

Young Entrepreneurs Invent Their Way To The Final - Farr High

Five teams of talented young entrepreneurs from schools in the Highlands have impressed judges from some of the country's leading businesses this week to make it through to the final stage of the ICT Youth Challenge.   Sixteen teams of budding young entrepreneurs travelled to the Horizon Scotland, Forres on Tuesday this week where they pitched their ideas for the information communication and technology products of the future.