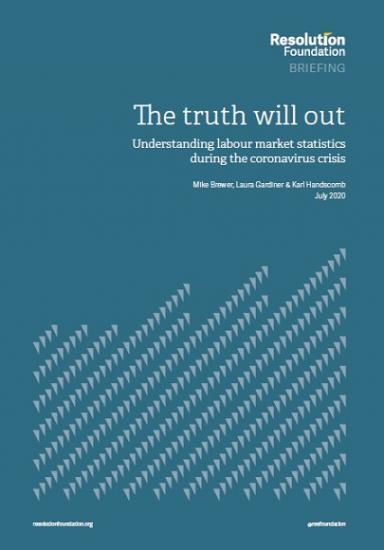 Labour market statistics matter. In normal times, they offer a snapshot on how household living standards are faring, and in recessions they also provide a key measure of how serious a crisis we face. Because the current coronavirus crisis is rooted in the labour market, even more attention is being paid to the monthly labour market data published by the Office for National Statistics (ONS) than usual, and measures of unemployment in particular. But the most recent releases have presented what seems at first glance to be a confusing picture. For example, in the June 2020 release, the official estimate of the unemployment rate for April hardly budged from that in the previous month. By contrast, the Claimant Count measure of unemployment, based on receipt of various out-of-work benefits, increased by a record monthly change of one million in April to reach 2.3 million (and then further in May to reach 2.8 million). Media coverage and politicians have focused on this huge Claimant Count increase, despite its apparent inconsistencies with other available data.

This note explores the inconsistencies between the different elements of the ONS' labour market release. It then sets out a number of their drivers, and provides recommendations to both the ONS and to users of these high-profile statistical releases.

The Claimant Count measure of unemployment is currently overstating the level of and changes in those genuinely unemployed and claiming unemployment-related benefits, for two reasons. First, the crisis occurred in the middle of the roll-out of Universal Credit (UC), and has dramatically increased the pace of that roll-out. The replacement of legacy benefits by UC leads to more people being captured in the Claimant Count, including those who would have previously only claimed Child Tax Credits and Housing Benefit, and claimants awaiting a health assessment.

Second, and more importantly, the easing of the usual work-search conditions and contact between claimants and work coaches between March and June means that many new UC recipients have not had their work status accurately updated as quickly as they otherwise would. This is particularly important in light of the Coronavirus Job Retention Scheme (JRS), with some furloughed workers making an out-of-work UC claim that would have placed them in the Claimant Count, before they knew they were furloughed.

Analysis of timely longitudinal survey data suggests that at least 27 per cent (400,000), and likely many more, of the 1.6 million Claimant Count rise between March and May is accounted for by those still working, furloughed workers, or Self-Employment Income Support Scheme (SEISS) grant recipients. While some of these people will ultimately be thought of as unemployed, it is far from clear that all should be right now. We estimate that only 45 per cent of the recent Claimant Count rise (700,000 claimants) relates to those newly out of work and not receiving other government support via the JRS or SEISS.

In contrast to the overestimate provided by the Claimant Count, the International Labour Organisation measure of unemployment in April will have underestimated any increase in unemployment. This is because the hard lockdown period, and the collapse in vacancies it caused, meant that many people who did not have a job during April, or who lost self-employed work, did not make an effort to look for new work. This is reflected in the fact that while unemployment did not budge, economic inactivity rose by 425,000 in the month to April, driven by those inactive for reasons other than the usual ones, and those who say they want a job.

It would therefore be more sensible to use the employment rate as the key indicator of the state of the labour market. But key employment measures are also failing to provide a complete picture of the state of the labour market and the amount of productive work being done. The headline employment measure includes people who are temporarily not working (the proportion of employees in this group has risen from around 7 per cent before lockdown to just under three-in-ten in the five weeks after lockdown began), while Pay As You Earn (PAYE) data misses out the self-employed, and includes employees who are not working but are being paid (including furloughed workers).

To gain a complete insight into the amount of productive work actually being done, we need to turn to additional indicators published by the ONS. These include the average and total hours worked in a week by those who are in employment (average hours fell by 23 per cent between early March and the last week in April), and the proportion of workers employed and not temporarily away from work.