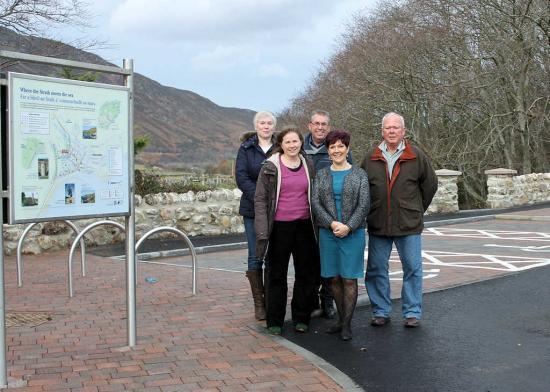 The environmental improvement works to Helmsdale’s Bridgend Car Park are now complete and the site has been reopened to the public. These works have been funded through The Highland Council’s Planning and Development Service capital programme and are the second phase in a package of works aimed at providing quality public space and visitor reception facilities for Helmsdale.

The first phase was completed in July in time for the village’s Translocation Festival which celebrated the bicentenary of the Kildonan Clearances. A new path was installed at Couper Park to provide all-abilities access to the Emigrant’s Statue, along with new seating and picnic benches. Map boards, interpretation panels, and a new community notice board were also installed at various locations, and provide information on places to explore and visit in the village.

The second phase of works has concentrated on the Bridgend Car Park in order to enhance its appearance and provide a more welcoming arrival point for visitors. Following consultation with the Helmsdale & District Community Council, the Helmsdale & District Development Trust and Timespan, the scheme was designed by consultant engineers, Grontmij and the works implemented by Lybster based contractors John Gunn & Sons.

The result has been a thorough ‘sprucing up’ of the car park, with the parking and pedestrian areas clearly defined and new surfacing installed throughout. The revised layout incorporates a visitor reception area with information boards, bike racks and improved access to the existing toilet block. BT poles have been removed to reduce clutter and cables have been placed underground. The Council’s TEC Services have relocated recycle bins to the harbour. A stone commemorative seat, which was donated by former resident Billy Jack, has also been installed on the pedestrian island, and now commands views down Dunrobin Street.

A significant visual change to the car park is the replacement of the unsightly crash barrier with a new stone wall. This traditionally built wall forms the rear boundary to the site, and also incorporates a gateway to the river path below. As the stone has been locally sourced, the wall’s inclusion compliments the historic character of the village.

Local Councillor and Leader of the Caithness and Sutherland Area Committee, Deirdre Mackay said: “I am delighted with the quality of the work which has been carried out with comparatively little disruption and a lot of co-operation and understanding from the residents and businesses in the village. The transformation really is noticeable as Bridgend car park is in such a prominent location within the village and it nicely compliments the other improvements which have been very well received. The new interpretation panels will give visitors a real feel for the history of Helmsdale and will hopefully encourage them to spend some time wandering around and exploring the area.

“The new charging point is an added bonus and over time it should help attract passing visitors to stop in Helmsdale and use the village as a place to recharge themselves as well as their cars.”

Do you have an electrical item that's lost its spark? By the end of January 2010 facilities will be in place at Recycling Centres across Highland to recycle all waste electrical and electronic equipment (WEEE).   Householders in Highland will be able to recycle any electrical item with a plug attached, or items operated by a battery.