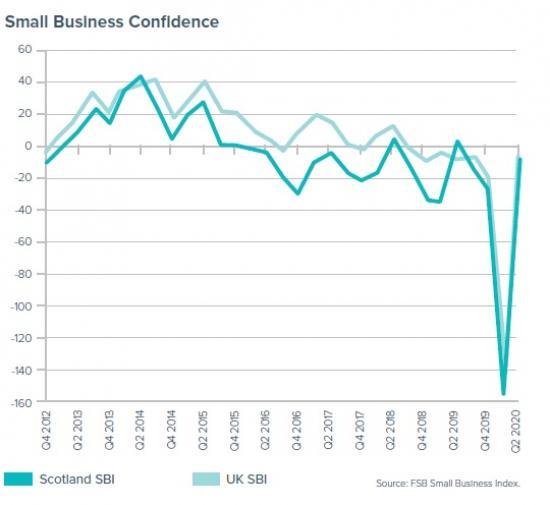 Small businesses experience a significant boost to confidence across the UK, but overall levels of confidence in Scotland are still below the UK average.

The FSB Scottish Small Business Index (SBI) increased 144.7 points to reach -10.1 in the second quarter of 2020. This marks a significant recovery from a record low of -154.8 points in Q1. In line with broader UK-wide trends, Scottish small businesses are uncertain heading into Q3, though such negativity is significantly less overwhelming than that recorded three months ago.

The recovery witnessed in Scotland was the third largest of all the UK's constituent regions and nations in terms of raw index points. Only the North West (184.4 points) and the West Midlands (146.4 points) saw a larger improvement on the SBI between Q1 and Q2.

Across the UK as a whole, small business confidence recovered by 138.4 points in Q2, though most regions and nations remained in negative territory. The UK-wide SBI witnessed a significant recovery following the record low reading of -143.4 in Q1. That the figure remains slightly negative suggests that nationwide small business confidence remains fragile, however, with the lockdown-induced slump in activity fostering widespread uncertainty. Though the index suggests some regional variation in small businesses' outlooks, Scotland is one of the least optimistic geographies heading into Q3 - as is the case in previous quarters. Only London (-25.6), the South East (-14.4), and the East of England (-10.2) reported lower index scores than Scotland, which is unsurprising since a different pace of unwinding lockdown restrictions was adopted north of the border.

Small businesses in Scotland are most negative about the impact coronavirus will have on future business performance. When asked specifically about the impact coronavirus will have on confidence in overall business performance in the next three months, all regions and nations recorded a negative net balance figure on this measure. However, Scotland was the most overwhelmingly negative at -75.9% in comparison to -66.1 for the UK. This net balance in Scotland is the result of 6.2% of businesses reporting an increase in confidence, which was clearly outweighed by the 82.1% reporting that their confidence had been affected as a direct result of coronavirus.

Businesses in Scotland see largest fall in profitability in Q2. As a result of the drop in demand arising from lockdown restrictions, businesses across the UK have seen a fall in both sales and profits. The most recent SBI data show that businesses in Scotland were most likely to report falling profits, with 81.8% of small businesses reporting a decrease in gross profit levels in comparison with the UK figure of 74.9%. Accordingly, the net balance figure for Scotland was also the lowest of all the UK's constituent nations and regions, standing at -71.9%.

The picture is somewhat less negative looking forward to Q3, though unsurprisingly the majority of Scottish small businesses still expect a further quarter of falling profits.

The employment outlook for small businesses in Scotland has shown slightly more resilience than anticipated. The proportion of Scottish small businesses reporting a reduction in the number of people they employ stood at 23.1% in Q2. This compares to 29.7% who reported in Q1 that they expected to make reductions in the following quarter. While this employment indicator shows a decrease in headcount, only London (17.8%) and the East Midlands (17.4%) reported smaller figures.

Overall, the net balance for the change in small business employment stood firmly in negative territory in Q2, reaching -21.5%, as against -19% across the UK.

Perhaps unsurprisingly, 17.4% of small businesses in Scotland expect to reduce the size of their workforce in the coming quarter, compared to the UK-wide average of 18.6%.

Global slump in oil prices sees falling fuel and utility costs. Reductions in demand and output have resulted in sizeable reductions in variable costs. Indeed, more Scottish firms reported falling costs than rising costs for in Q2. In fact, the fall in costs was most widespread in Scotland, with 46.6% of firms reporting an annual decrease in operating costs.

Looking forward to Q3, spare capacity remains on the cards for Scottish small businesses, as is also the case for those across the UK, with demand levels and business operations likely to be curtailed for some time amidst lingering economic uncertainty. At 73.9% of businesses, those in Scotland are the most expectant of spare capacity, significantly outweighing the national average of 68.1%.