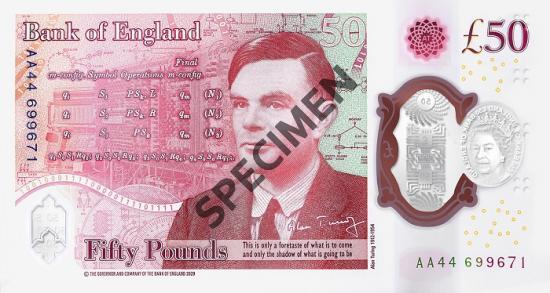 The new £50 note will start to become available in bank branches and at ATM's ian the coming days and weeks.

30 September 2022 will be the last day you can use Bank of England paper £20 and £50 notes. After 30 September 2022, these paper notes will no longer be legal tender, so we encourage people to spend them or deposit them at their bank ahead of this date.

The polymer £50 note contains advanced security features, completing our most secure set of Bank of England polymer banknotes yet. The note will join the Churchill £5, the Austen £10 and the Turner £20, meaning all Bank of England banknotes are now available on polymer.

Speaking at Bletchley Park, where Turing carried out his famous codebreaking work, Governor Andrew Bailey said: "Our banknotes celebrate some of our country's most important historical figures. That's why I am delighted that Alan Turing features on the new polymer £50 note. Having undertaken remarkable codebreaking work here at Bletchley Park during the Second World War, he went on to pioneer work on early computers, as well as making some ground-breaking discoveries in the field of developmental biology. He was also gay and was treated appallingly as a result. Placing him on this new banknote is a recognition of his contributions to our society, and a celebration of his remarkable life."

Speaking as the note entered circulation, the Bank of England’s Chief Cashier Sarah John said "The polymer £50 note is the most secure Bank of England banknote yet, and the features of the note make it very difficult to counterfeit. All of our polymer banknotes can be checked by looking for two key security features: a hologram which changes image; and see-through windows. So if you can check one denomination of banknote, you can check them all. The new £50 notes, like the polymer £10 and £20 notes, contain a tactile feature to help vision impaired people identify the denomination."

The Bank of England Museum has launched an online exhibition to coincide with the Turing £50 banknote entering circulation. Find out how Alan Turing’s work inspired the new £50 note design in a multimedia tour on SmartifyOpens in a new window, the digital arts and culture platform.

To celebrate Alan Turing’s life, the Bank of England is proudly flying the Progress Pride Flag above our Threadneedle Street building today.

Features on the new £50 note include:

A photo of Turing taken in 1951 by Elliott & Fry which is part of the Photographs Collection at the National Portrait Gallery.

A table and mathematical formulae from Turing’s seminal 1936 paper "On Computable Numbers, with an application to the Entscheidungsproblem" Proceedings of the London Mathematical Society. This paper is widely recognised as being foundational for computer science. It sought to establish whether there could be a definitive method by which any theorem could be assessed as provable or not using a universal machine. It introduced the concept of a Turing machine as a thought experiment of how computers could operate.

The Automatic Computing Engine (ACE) Pilot Machine which was developed at the National Physical Laboratory as the trial model of Turing’s pioneering ACE design. The ACE was one of the first electronic stored-program digital computers.

Technical drawings for the British Bombe, the machine specified by Turing and one of the primary tools used to break Enigma-enciphered messages during WWII.

A quote from Alan Turing, given in an interview to The Times newspaper on 11 June 1949:
“This is only a foretaste of what is to come and only the shadow of what is going to be.”

Turing’s signature from the visitor’s book at Max Newman’s House in 1947 which is on display at Bletchley Park, where he worked during WWII.

Two key security features can be checked to help confirm that notes are genuine:
a metallic hologram which changes between the words ‘Fifty’ and ‘Pounds’ when the note is tilted.

a large see-through window with a gold and green foil on the front depicting a finely detailed metallic microchip image.

There are two green 21 spiral features based on a sunflower head (linked to Turing’s morphogenetic work in later life). The foil is silver on the back.

A metallic hologram which changes between the words ‘Fifty’ and ‘Pounds’ when the note is tilted.

A silver foil patch with a 3D image of the Coronation Crown.
The Queen’s portrait in the see-through window with ‘£50 Bank of England’ printed twice around the edge. (The small clover shapes on the outside of the window are based on architectural features at Bletchley Park.)

A smaller see-through window in the bottom corner of the note, the shape of which is based on architectural features at Bletchley Park.
A red foil patch containing the letters ‘AT’ is based on the image of a sunflower head linked to Turing’s morphogenetic work in later life.

Further details about the new £50 note are available at www.new50.co.uk.