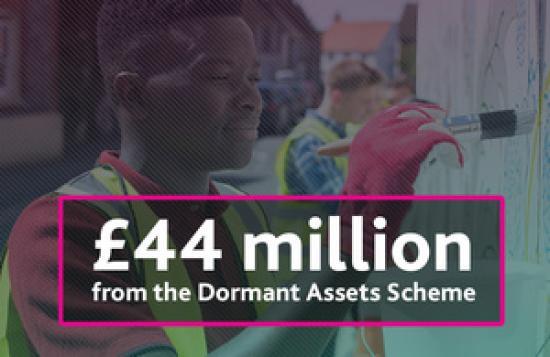 Additional £44 million allocated through the Dormant Assets Scheme, taking the total to almost £850 million over the past decade.

Funding will help tackle youth unemployment, support communities in deprived areas and give people in need access to finance
New Government Bill could unlock further £880 million for good causes
Communities and good causes across England have been allocated an additional £44 million through the Dormant Assets Scheme.

In Scotland, £67.2 million of dormant assets funding has been allocated through the Young Start programme. Young Start has made over 950 grants of up to £100,000 to voluntary and community organisations for projects led by young people, which help them become more confident and realise their own potential.

The funding will be used to tackle youth unemployment, expand access to investment for charities and social enterprises, and help improve the availability of fair, affordable loans to people in vulnerable circumstances.

The Dormant Assets Scheme releases funds from dormant bank and building society accounts, which are accounts that have been open for 15 years, but during that period no transactions have been carried out.

The £44 million funding will be distributed by The National Lottery Community Fund, as follows:

£20 million will enable Youth Futures Foundation to test and evidence the best approaches to breaking down barriers and improving access to employment for disadvantaged young people
£20 million will go to Access - The Foundation for Social Investment, to provide urgently-needed finance for up to 1,000 charities and social enterprises, particularly in more deprived areas
£4 million will allow Fair4All Finance to accelerate their work on affordable consolidation loans for people in financially vulnerable circumstances
Already more than £800 million has been unlocked by the Dormant Assets Scheme over the last decade, including £150 million that supported the response to the COVID-19 pandemic in 2020.

Nigel Huddleston, Minister for Sport, Tourism, Civil Society and Youth, said:This latest £44 million allocation from the Dormant Assets Scheme will make a real difference to people's lives in communities across England. As well as helping young people find jobs, it will also provide financial support to those that need it the most.

And we will not stop here. We are currently bringing legislation through to expand the Dormant Assets Scheme even further, so it can release even more money to help level up communities throughout the country.

It follows the Government publishing its Levelling Up White Paper last week, which set out a plan to transform the UK by spreading opportunity and prosperity to all parts of the country.

Following a public consultation process, a new Bill is currently working its way through Parliament, which is set to deliver on the Government's commitment to expand the Dormant Assets Scheme.

This could potentially unlock a further £880 million across the UK over the coming years by enabling a wider range of dormant assets to be transferred into the Scheme from the insurance and pensions, investment and wealth management, and securities sectors.

There are 30 participating firms in the Dormant Assets Scheme, which will continue to have consumer protection at its heart, with participants’ first priority continuing to be reuniting people with their assets.

Where this is not possible, more businesses will soon be able to voluntarily transfer dormant assets into the Scheme, unlocking funding for social and environmental causes across the UK that are additional to central or devolved government funding.

The Scheme has previously helped individuals like Chris Coyle, who grew up in a deprived area of Coventry and was introduced to cycling through an inner-city Council initiative, and went on to establish Ebikebrum, a community cycle cafe and shop. Thanks to a combined grant and loan of £83,000 from Key Fund under the Growth Fund, a partnership between The National Lottery Community Fund and Big Society Capital delivered by Access through a range of social investors, Chris was able to provide services from information about healthy lifestyle choices to a full cycling activity programmes, specialising in electric bikes.

Fair4All Finance has previously used the Dormant Assets Scheme to provide Moneyline with long term funding, enabling them to provide more affordable credit to people in vulnerable circumstances. One beneficiary, who has asked to remain anonymous, had been going through a divorce from an abusive relationship and having financial difficulty before reaching out to Moneyline, who provided the support she needed.

Another organisation which has benefitted from the Scheme is West of England charity, 1625 Independent People (1625ip), which receives grant funding from Youth Futures Foundation in partnership with the West of England Combined Authority. This funding helps young people who are leaving care to prepare for and find good jobs through its Reboot West programme. The charity works in partnership with the leaving care and employment and skills teams across four local authorities in Bristol, Bath and North East Somerset, South Gloucestershire and North Somerset. It offers coaching, training and bespoke careers support.

David Knott, Chief Executive of The National Lottery Community Fund, said:The money unlocked through the Dormant Assets Scheme will be widely welcomed and comes at a challenging time for communities. We’re delighted to be distributing this £44 million on behalf of DCMS, to support charities and social enterprises working to help people in some of the most deprived areas of England. This vital funding will have an impact on people’s lives and support them towards a more prosperous and thriving future.

Seb Elsworth, Chief Executive of Access - the Foundation for Social Investment, said:Communities need the support that charities and social enterprises can provide, creating vital jobs and addressing entrenched social problems. But too often, they can struggle to get the finance they need to innovate or grow. The additional £20 million from dormant assets will help us and our partners to deliver the small-scale loans that most charities and social enterprises need and further target investment into places and communities that have been previously overlooked.

Matthew Poole, Director of Grants and Investment at Youth Futures Foundation said: When young people facing disadvantage told us what they want from employment support, they talked about changes to the whole system. That’s why we’ve launched our £6.1 million Connected Futures Fund to reduce the fragmentation of youth employment and skills delivery in the places that need it most. Our aim is to join up services at a local level so that young people furthest from the job market receive good quality, consistent support that understands their complex needs. We will scale up our learning of what works so that more places are able to offer effective provision. The additional £20 million from dormant assets will help us to build on this momentum.

Sacha Romanovitch, Chief Executive of Fair4All Finance, said:11 million people built up some £25 billion of debt during the pandemic. Much of that burden falls on people living on low incomes in the most deprived areas of the country. Problem debt, often well over £10,000 across multiple providers, quickly becomes unmanageable. It has a significant impact on people’s mental health and wider wellbeing. It limits opportunities and keeps people from participating in communities.

We’re pleased the government is supporting affordable debt consolidation with £4 million of dormant assets funding. We’d also like to see the wider credit sector play a part by working with us to write down and consolidate debt through affordable credit providers where customers have reached their tipping point.

The definition of a dormant bank or building society account is in the Dormant Bank and Building Society Accounts Act 2008: an account is ‘dormant’ at a particular time if the account has been open throughout the period of 15 years ending at that time, but during that period no transactions have been carried out in relation to the account by or on the instructions of the holder of the account.

In tackling systemic inequality and ensuring access to opportunities, funding is particularly directed to some of the most left-behind areas of the country.

Where dormant assets funding has been distributed to date:

In England, the Scheme has unlocked £100 million to tackle financial exclusion and problem debt; £110 million to break down barriers to work for young people; and £485 million of investment into the nation’s charities and social enterprises. In 2020, £150 million from the Scheme was released for the organisations in England to support their coronavirus response and recovery efforts.

In Wales, £37.7 million of dormant assets funding has supported a variety of projects, including investing £16.3 million in young people, learning, education and employment; and £4.9 million in climate change action. Sustainable Steps Wales will invest a further £16,950,000 over the coming 18 months.

In Scotland, £67.2 million of dormant assets funding has been allocated through the Young Start programme. Young Start has made over 950 grants of up to £100,000 to voluntary and community organisations for projects led by young people, which help them become more confident and realise their own potential.

In Northern Ireland, dormant assets funding is being used to provide multi-year flexible funding to increase the capacity, resilience, and sustainability of the voluntary, community, and social enterprise sector through a £22.4 million Dormant Accounts Fund.

Under the Scheme, funds are held by Reclaim Fund Ltd (RFL). RFL is authorised and regulated by the Financial Conduct Authority, and must hold sufficient money to cover any customer reclaims. It releases the surplus to The National Lottery Community Fund to distribute for social or environmental initiatives across the UK. DCMS’ Secretary of State can issue policy directions over the English portion of funding.