Lottery Award To Flow Country On The Cards 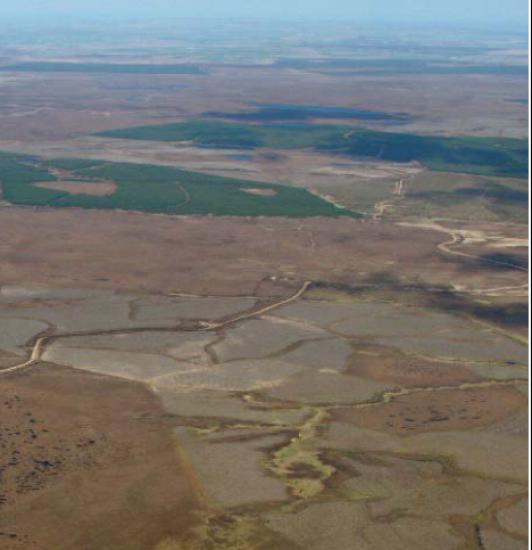 One of the most significant contributions to the UK's climate change targets has moved a step closer as the Heritage Lottery Fund (HLF) today announced a *first-round pass grant of over Ł4million to restore Europe's largest intact expanse of blanket bog.

Flow to the Future is an ambitious plan, co-ordinated by the Peatlands Partnership, to restore seven square miles of globally important peatlands (blanket bog) in Caithness & Sutherland. This will dramatically improve the habitats for many rare plants and species, such as otters, hen harriers and golden plovers, while playing a critical role in the fight against climate change.

The peatlands of the Flow Country stem from the damp, cool conditions that have encouraged the growth of sphagnum moss and cotton grasses since the last Ice Age over 10,000 years ago. The partially decayed plants have slowly formed layers of peat in places many metres deep. This ancient environment is a repository for vast amounts of carbon locked into the peat. An estimated 400 million tonnes of carbon is stored in the peat in the Flow Country which is double the amount of carbon in all the UK's forests. One of the last great wildernesses left in the UK, the Flow Country has been put forward by the UK Government as a potential UNESCO World Heritage Site.

After remaining largely untouched for millennia, the area underwent a massive change in the 1970s and 80s with the planting of non-native conifer trees and deep forestry ploughing in an attempt to make the land more productive. As a result, huge areas of blanket bog have been damaged or are eroding with devastating effect. Bog plants have been lost, rare bird species have seriously declined, and carbon is now being emitted rather than absorbed and stored. A loss of only 5% of the carbon stored in peat would equate to the UK's total annual green house gas emissions**.

The UK is a world-leader in peat restoration - some of it developed in the Flows - and this expertise will be used during this five year landscape-scale project to restore the blanket bog. A new field centre will be located at the RSPB's Forsinard Flows nature reserve. The reserve, the RSPB's largest, has been at the centre of peatland restoration work for 16 years. Volunteers, PhD, MSc, and BSc students from across the world, working alongside RSPB staff, will have the opportunity to train in monitoring and evaluation work and contribute to this emerging centre of excellence in peatland ecology, hydrology and carbon capture. It is estimated that there will be nearly 6,000 volunteer days delivered through the project.

There will be a step-change in communicating the importance of this threatened landscape so that the Flows become a key symbol for public engagement with this globally-important subject. The current visitor centre at Forsinard Railway Station will be improved to provide an interpretative gateway with engaging and interactive exhibits, encouraging people to enjoy the landscape and its wildlife. New technologies and a mobile exhibition will bring the story of the peatlands to those that cannot visit.

Colin McLean, Head of Heritage Lottery Fund Scotland, said: "The Flow Country is an area of exceptional natural heritage merit. Over 8,000 years of the history of plants, weather and people lie preserved in its layers of peat. Yet this living landscape is as important to our future as it is to our heritage. We are delighted to be able to give our initial support to a project which will reverse the damage of earlier forestry planting, while we still can, and make an important contribution to the global climate change agenda."

John Henderson, Chairman of the Peatlands Partnership, said: "We're delighted that we have cleared this all important first hurdle and that the Heritage Lottery Fund recognises the potential of what can be achieved in this landscape. The Flow Country is a truly special area, a valuable store for carbon, a haven for birds and animals and remarkably beautiful. Its future protection and conservation is essential if we want to reduce the devastating impacts of climate change."

To date, HLF has supported RSPB Scotland's work in the Flow Country with grants totalling Ł480,540.

Local people in and around Lairg in Sutherland are being invited along to an evening reception by Scottish Natural Heritage (SNH) at Ferrycroft at 7.30 pm on Wednesday 3 March 2010.   SNH is the Scottish Government's advisor on the management, enjoyment, understanding and sustainable use of Scotland's wildlife, natural habitats and landscape.
[Advisory / Counseling Services]
23/12/2009

A new team for Caithness has been created at Scottish Natural Heritage's North Highland Area Office in Golspie.   Tom Kellett is now in charge of the team of Area Officers following a promotion.
[Advisory / Counseling Services]
21/12/2008

Environmental projects in Sutherland are set to benefit from a Ł20,000 SNH grant for the Sutherland Partnership which will oversee a new assistance fund.   The Sutherland Environmental Fund will operate over three years from spring 2009 with the themes of involvement and biodiversity.
[Advisory / Counseling Services]
1/4/2007

Scottish Natural Heritage (SNH) is calling on land managers throughout Scotland to ensure that they are not missing out on potential income opportunities from land designated as a nature conservation sites.  Under SNH's Natural Care programme land managers can earn extra financial support by signing up to agreements to ensure these important sites will be maintained in the best condition possible.
[Advisory / Counseling Services]
2/4/2006

Helping businesses conserve biodiversity across Scotland The Business and Biodiversity Initiative provides businesses with free practical, on site advice on ways they can contribute towards the conservation and enhancement of habitats and species locally and nationally.   Enhancing biodiversity can have a wide range of benefits to businesses, including improved employee satisfaction, improved image, reduced noise and visual complaints from neighbours and improved environmental credentials.